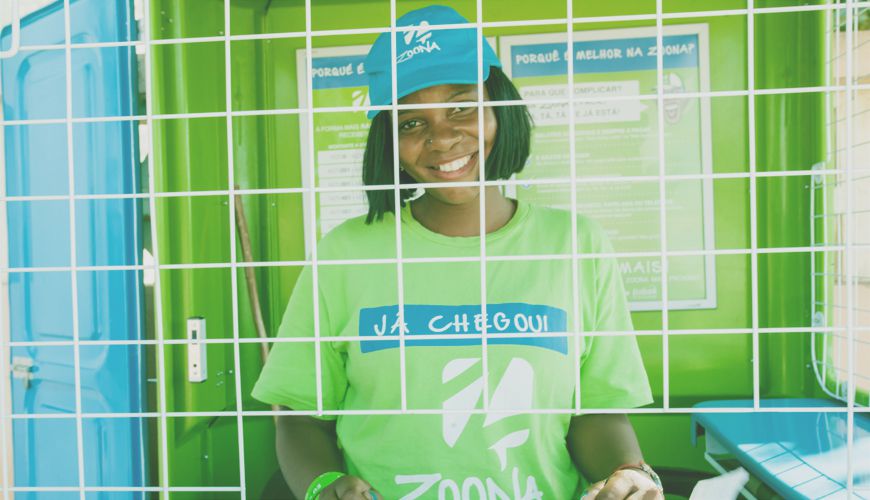 When brothers Brett and Brad Magrath founded Zoona in 2009, they knew they didn’t to build just another African mobile money company. They wanted something authentic, that would have a real impact on people across the continent.

With more than 1.5-million customers and US$1-billion transacted, the company is well on its way to achieving that.

It’s done so by blending together proprietary technology, an on-the-ground network, and consumer financial transaction products and services.

None of that success, however, would be possible if Zoona’s employees weren’t fully invested in the founding mission.

It’s not an easy thing to achieve, especially when you experience the kind of growth Zoona has in recent years.

We recently got the chance to spend a little time in Zoona’s new Cape Town HQ and talk to co-founder and Chief People Officer Brad Magrath and Chief Marketing Officer Lelemba Phiri about employee culture at the high-growth startup.

“I think culture trumps everything,” Magrath told us. Vital to building a strong company culture, he added, is ensuring that everyone understands why Zoona exists as a business and how it works when it comes the way it treats both its own employees and its customers.

“I think both those things are quite key to our culture,” the Zoona Chief People Officer said.

Phiri agrees. “I think culture has been absolutely fundamental,” she told us. “It’s been one of the benchmarks of excellence for us”.

When it comes to maintaining that culture during periods of high growth – Zoona grew from 25 to 250 employees between 2012 and 2016 — Magrath acknowledges that “it is challenging”.

But, he added, “it’s something that you don’t compromise on and you never take for granted, and you treat with a lot of respect and humility”.

That attitude is evident even throughout Zoona’s office. It is, however, most evident in a wall covered with symbols that represent the company’s founding principles. It is a constant reminder of why Zoona was started and how it sees itself as a company. Of course, you can send all the right messages and have all the right office décor, but none of it matters very much if you don’t hire the right kind of people.

“We’re very focused on our hiring and who we bring into the business,” Magrath told us.

Evidence of that lies in the fact that prospective Zoona employees go through a dedicated culture interview, where they spend time with people from across the business. New employees meanwhile go through an extensive onboarding process.

To some, it might seem a little intense, but hiring for culture does have some neat spin-offs. One of those is that employees can easily move between teams. Perhaps the best example of this is Phiri. When the now chief marketing officer started out at Zoona in 2012, she was brought in as a finance and operations controller. From there she became managing director for Zambia, before being promoted to Group Head of Talent and MD for Zambia and Malawi.

While Phiri calls her career trajectory a “fantastic roundabout”, there’s no doubt that she’s achieved great things while at Zoona. In fact, in 2016 she was named a Cordes fellow and one of the 50 most promising social entrepreneurs in the world.

Having worked across different departments, Phiri is also highly cognizant of the different employee needs in those departments.

Many personalities, one vision

That’s good, because one of the side effects of Zoona’s business model – which aims to free up African economies by reducing the need for cash – is that it’s had employees with unique specialisations from the get-go. And as the business has grown and expanded into new markets, so has that employee complexity.

In the Cape Town offices alone, there are technical, finance, marketing, and call centre teams. Then there are the agents out in the field. These agents aren’t actually Zoona employees, but entrepreneurs who can build their own teams. Nonetheless, it’s vital that they embody what Zoona is all about. Keeping different specialisations in line with a company vision is one thing, doing so across multiple countries is another thing entirely.

“That’s been a challenge,” Phiri told us. “We have to be cognizant of the fact that there are country cultures out there as well. So you can’t say one size fits all”.

One example of this how people address each other in the company. In South Africa, people are generally okay with first names, but in Zambia for instance, people might prefer to be called by their title.

Another example is health and wellness benefits.

As Phiri explained: “Maybe in South Africa, someone comes in and does massages. That’s wonderful and there are people here who love it, but in Zambia people don’t want to be touched”.

“We need to be respectful of that and ask, ‘what is their definition of health and wellness and how do we provide that?'”, she said.

While Zoona respects those differences, it still expects its employees to stick to overall company culture.

Magrath is just as firm when it comes to company benefits. While they certainly exist at Zoona – employees were treated to a cooked lunch when Engage Me was there – they’re not seen as the be-all and end-all of company culture.

“The interesting thing about benefits is that once you give them once, they become the norm,” Magrath said. “I think largely benefits are a small part of what is a total employee value proposition and that you’ve got to see these things in their entirety”.

That includes having a great workspace “where capable people are confident to experiment and to engage others”, a really solid hiring and onboarding process and even ensuring that when an employee leaves the business, they do so on good terms. Get that right, and you build a business that can maintain its core identity.

And that’s certainly what Zoona is out to do.

That’s not for lack of ambition though. It’s just a recognition that if Zoona neglects those strengths and tries to tackle the corporates head-on, it’ll get squashed pretty quickly.

“We compete on our strengths, which is our agility, our focus, our ability to take our customer into the solution,” Magrath said.

And people, more than anything, are vital to the company being able to do that.

“I’d rather grow the business on principles than policies,” the Zoona Chief People Officer told us.

“That’s why it’s so important to hire good people, so that they come in and they accelerate us, and don’t slow us down”.