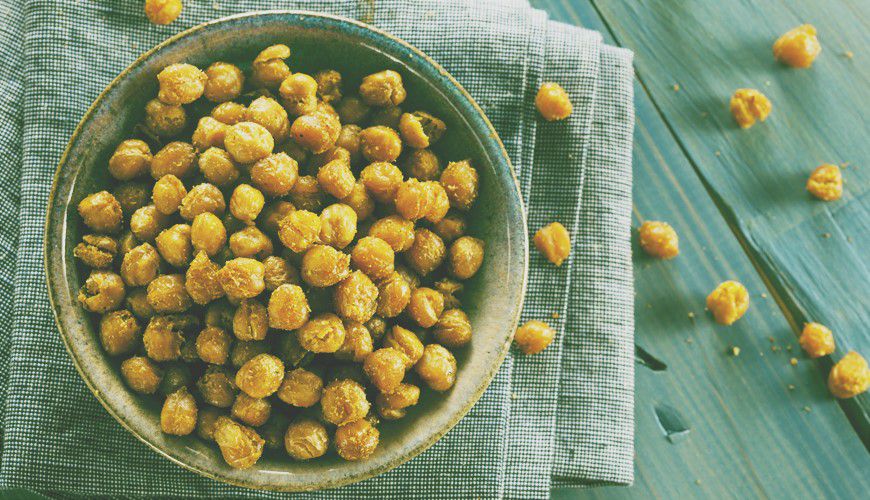 Let’s assume you’re a forward-looking company. Maybe you decided to install an office snack bar a little while ago.

Maybe, for the sake of convenience, you allowed some unhealthy choices to creep in. Or maybe it’s been healthy all along, but everyone’s bored of the same old options.

Either way, it’s time to shake things up a bit and get everyone excited about the snack bar again.

And what better way to do that than with some on-trend health snacks?

Not sure where to start? Here are some of the coolest options we’ve found.

Over the past few years, Kale has become a staple of the health food movement. A cabbage variant, Kale is high in vitamin K, vitamin A, vitamin C, vitamin B6, folate, and manganese.

It’s great as an addition to a salad, stir fry, or mixed with other green vegetables.

Through the magic of air crisping, you can also get it in chip crisp form (often with added flavours). That makes it a great alternative to your standard potato chips.

Chickpeas – also known as gram or garbanzo beans – have been a part of the Middle Eastern diet for millennia.
High in protein, it is one of the earliest cultivated legumes, with some remains dating as far back as 7 500 years ago.
It’s also incredibly versatile. According to Wikipedia, chickpeas can be cooked and eaten cold in salads, cooked in stews, ground into flour, ground and shaped in balls and fried as falafel, made into a batter and baked to make farinata or cecina, or fried to make panelle.

For the purposes of this article, we’re most interested in crunchy chickpeas. This snack is made by oven-baking chickpeas with salt and whatever other flavouring you might want.

It seems delicious and totally moreish.

When it comes to office snacks, one of the healthiest options is to simply lay out fresh fruit. There are even companies that’ll deliver personalised boxes to your company on a weekly basis.

But when it comes to longer-lasting items, there are other options. One is to stock your snack bar with dried fruit, although it has much higher concentrations of sugar than the fresh stuff.

Fruit crisps, which are made by freeze-drying individual slices of fruit, have no added sugar and retain nearly all the nutrients found in fresh fruit. Their crispy texture also means they bring a little added variety into the mix.

In some cultures, eating seaweed still seems a bit “out there”. Many, however, are learning what others have known for thousands of years: prepared properly, seaweed can be a tasty and incredibly nutritious food-stuff.

When it comes to finding a place for seaweed in your snack bar, your best bet is probably to go with one of the various ranges of roasted seaweed snacks out there.

Depending on which provider you go with, you’ll have a range of flavours (including sea salt, paprika, and Teriyaki) to choose from.

While the Andean people have grown it for the past three-to-four thousand years, it was almost completely unknown to the outside world until relatively recently.

Since then, however it’s taken off in a big way. The fact that it’s much higher in protein than traditional grains and is also a rich source of dietary fibre, several B vitamins and dietary minerals, means that it’s a firm favourite among health fanatics.

And that, inevitably, means it’s worked its way into the snack food market.

Quinoa puffs are made in a similar way to popcorn. On their own, these puffs are still quite small and can be added to cereal, muffins, cookies and breads.

They can also be bound together in savoury clusters, or savoury puff balls for a variety of snacking options.

Do you have any exciting, healthy options in your snack bar? Let us know in the comments section below.