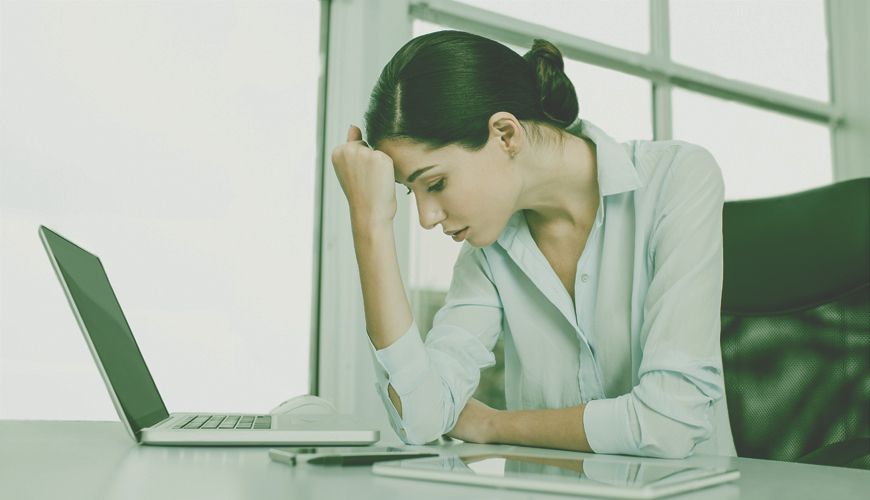 Clearly then, it’s something that companies should be concerned about. But depression can often be something that people suffer in silence, making it difficult to figure out whether or not you should intervene.

That said, there are some signs you can look out for. Here are a few of them.

One major sign that an employee is suffering from depression is a marked decrease in productivity.

That’s because depression can act as a complete sap on motivation. Even the simplest of tasks can feel almost impossible.

It’s important to note though that someone who was previously eager and motivated one day probably isn’t just going to stop delivering the next. Instead, it’s likely to happen gradually, with performance slipping over time. It’s also important to remember that a decrease in productivity on its own isn’t necessarily a marker for depression and should be considered in concert with other signs and symptoms.

Depression doesn’t just sap your motivation while you’re at work, it can make it difficult to even contemplate going into work in the first place.

That’s just one reason why a depressed employee might be late though. For some, work might be the best part of their day, with their living circumstances or commute being the thing they battle to get through. For others though, lateness may come as a result of the need to convince themselves to get out of their car and go through the office doors.

Whatever the case, a previously punctual employee suddenly arriving late on a repeated basis is something you should keep an eye on.

Another marker of depression to look out for is increased absences from work. Once again though, it’s not as simple as it might seem on the surface.

Some employees might take more sick leave, without providing much detail on what’s affecting them (even when required to present a sick note, they are within their rights to ask their primary practitioner to exercise discretion). Other employees might try to come up with excuses or simply not come in.

Again though it’s important not to assume that increased absenteeism is down to depression. What matters isn’t a single behaviour, but whether that behaviour is among the series of signs of depression we’ve outlined above.

Look, we all occasionally get less sleep than we should, that’s life. But if a previously energised employee starts looking tired at work and has dark circles under their eyes, it may be cause for concern.

Depression is complicated. At a time when you could most use the company of people, you can withdraw deep into yourself. For many, this comes from a desire not to burden others with their condition.

If a previously sociable employee suddenly seems socially isolated, it’s definitely something you should look into.

Before we look at ways to reach out to an employee who you suspect is suffering from depression, it’s important to reiterate that it’s a complex condition which affects different people in different ways. That means different people require different approaches.

What you can do, however, is create an open workplace where no one feels stigmatised should they choose to share their condition with their colleagues and management. At the same, you should respect an employee’s privacy if they choose not to share.

And finally, unless you notice that someone’s work is being affected, don’t assume that depression means they’re incapable of doing their job. Many successful people manage depression on a daily basis. There’s no reason your employee shouldn’t be one of them.