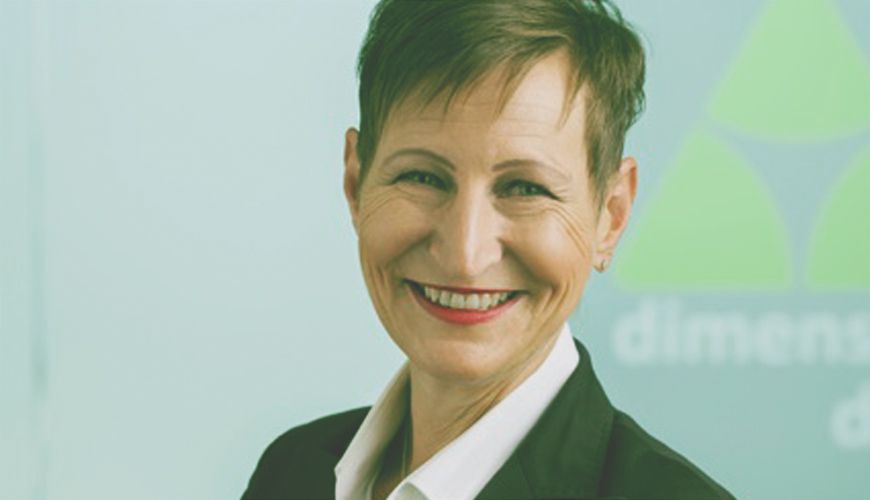 When Mechelle Buys du Plessis was growing up, she wanted to be a cash register operator. “Can you believe it?” she laughs. “I fancied the way I would see people punching the digits, then the draw would suddenly open, it would go ‘ching’ and the money would come out. That was the dream job for me until I was about ten years old. Then ambition kicked in.”

That it certainly did. Fast forward to today, and Buys du Plessis is the Managing Director of Dimension Data, Middle East – a serious player in the IT industry which has 31 000 employees working across 58 countries on a coveted roster of Fortune 100 and Fortune 500 clients.

The company, which started in South Africa, has been operating since 1983. Buys du Plessis joined them in 1994, and during her tenure, has spent 23 years working across diverse sectors, from marketing to client services and sales management.

Her current role as MD, Middle East is hugely demanding but this doesn’t seem to phase cool, calm and collected Mech (as she likes to be called). “The funny thing is,” she says, “is that I’m probably just operating a cash till – just in a different way.”

In between her meetings across the Middle East, we caught up with this inspirational woman to learn more about her story, which we hope you’ll find as encouraging as we did.

Engage Me: How did you get into the IT industry?

Mechelle Buys du Plessis: By luck. After studying nutrition (and realising that it wasn’t for me), I enrolled in a law degree and needed a job to pay the fees. I went for an interview with Dimension Data – not knowing a thing about IT, and they hired me. I mean, I didn’t have a clue about computers and couldn’t even turn one on, but I started and I just loved it. I never finished the law degree.

The company was young at the time and it was the dawn of IT in South Africa. The industry was going through tremendous changes, as was our country because Nelson Mandela became the first black South African president in 1994.

EM: Why do you love what you do?

MBdP: I’m lucky enough to work in an industry that is constantly changing and I can see the results of my efforts. It’s disruptive, and I love that about it. I am continuously learning and each day is different because something new is always going to happen.

EM: You’ve worked for the same company for more than two decades – do you ever regret not moving around?

MBdP: Not at all. They’ve been good to me, and I’ve been good to them. I’ve always been kept busy and have probably never held the same role for more than two years. There are a lot of opportunities for growth within the company. I’ve worked across 3 continents and have had great exposure – I don’t think you get better than that.

EM: What is a highlight in your career?

MBdP: I have had many memorable moments and achievements. Perhaps one of the biggest, is when I was appointed as Head of Marketing for Africa and the Middle East, before I moved to the UAE.

It was a hugely important role; and is best described as being the eye of the storm. All the knowledge and experience that I had built up over the course of my career (by working in so many divisions) came together in this one particular position. I believe that it was having this 360 background that allowed me to play effectively in a new space.

In addition, it’s because of this role that I first visited the UAE to plan the company’s strategy for the Middle East. And I decided that instead of just being a part of planning, I also wanted to be part of the execution. I put my money where my mouth was and look what happened.

EM: You’ve taken brave steps in your career. Do you ever get scared or doubt yourself?

MBdP: Not at all. If I am going to take a role, I will do whatever I can to succeed. I am always clear on what my goals are and change doesn’t scare me. The only thing I could imagine being fearful of is stagnation – I would never want that.

EM: Do you believe in mentorship? And who do you look at for inspiration?

MBdP: I think there are a number of really good business leaders out there. I respect the likes of Richard Branson or Elon Musk – he blows my mind in terms of how he operates.

I’ve had a lot of mentors within Dimension Data as I really believe in this. Even some of my clients have mentored me. When it comes to choosing a mentor or setting up a programme for mentees, I believe that it has to add value to your career and there must be clear outcomes.

EM: How would others describe your leadership style in one word? And why?

MBdP: Charismatic. I am definitely not a dictator and my approach is collaborative. I have a great team of strong and smart individuals who I really trust. I don’t believe in hierarchical cultures – there’s no space for silos and politics in business today.

EM: How has your experience been as a woman in a position of power?

MbDP: In terms of my team, I have always found that the best way to gain the confidence of my colleagues is to get their buy in. When I took over as MD, many people knew me already, but not everyone had worked for me. Given this reshuffle, I had to allow time for them to believe in me.

I soon realised that the only way I was going to get that was to have short-term goals which I met, and shared with them. As long as I have delivered, everyone has been on board.

In the industry, I have never experienced any issues as a female leader. This may be surprising but I have found if I have been given the floor space with a C-level person, or anyone really, I have never been in a situation where I have not felt accepted, or trusted. If you know your stuff, I’ve found you are always welcome.

EM: As a working mother, how have you maintained a work-life balance?

MBdP: This is always an issue and you are always going to feel guilty. In fact, there are two types of guilt: one if you are working and travelling, and one if you are not doing that – you have to pick one and get on with things even though it’s tricky.

I have always travelled a lot for work, and I am sure this has had an impact on my daughter, but in saying that, she also really respects my position and what I have had to do.

EM: Do you exercise to help maintain your stress levels?

MBdP: I am terrible at sport and I hate the gym! I don’t even have a membership.
I do however enjoy the outdoors and I love to walk. I have two saluki dogs and they need a lot of exercise so I walk them daily and this is a good stress reliever.

I also love yoga for its physical and spiritual aspects, but I don’t have enough time to dedicate to it – even though I should make time.

EM: Do you see yourself staying in the UAE for much longer? What’s next?

MBdP: That’s a big question. I think the UAE is a transient place where one year can turn into 10 and vice-versa. I’ve never had a very long term strategy in terms of staying here (says the person who has been here for 10 years). However, I feel that I still have a responsibility for the business and I would like to see that through in a sustainable manner. This can only be achieved in around a five-year period of continuous performance.

Ultimately though, I would like to have an early corporate retirement to pursue my own entrepreneurial interests. I don’t see myself doing that here. It may be in South Africa or wherever the wind blows me next.

Tiffany is an award-winning writer and talented editor with more than 11 years’ experience working for a number of globally recognised companies including, Ogilvy, BBDO Network, Media24, ITP Media Group and Etihad Airways. She’s also a proud gypsetter; constantly on the move she likes nothing more than gathering stamps in her passport.