Fuzzy Logic’s Jason Ried on gaming and AR in the workplace: the Engage Me interview 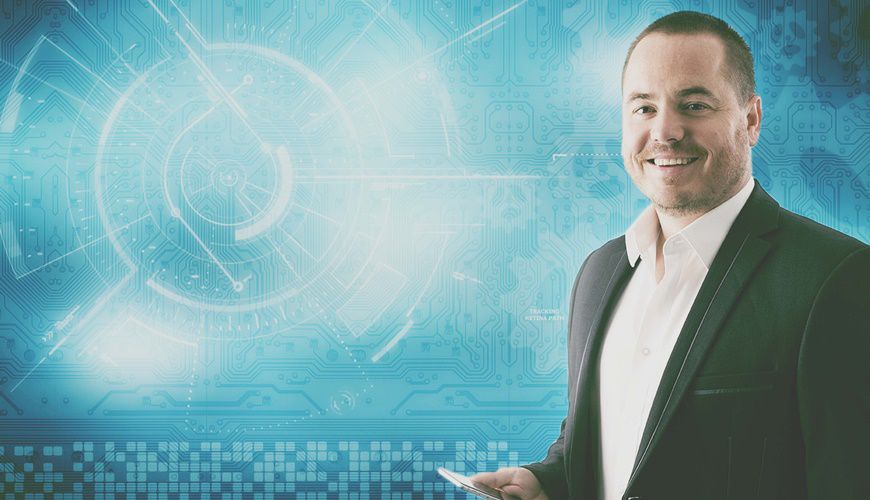 Anyone entering the workforce today would find it difficult to believe that game development was once seen as an outsider profession catering to a niche industry. From humble origins, the industry is today worth nearly US$100-billion, with its biggest players attracting the kind of devotion most companies can only dream of. Small wonder then that, over the past couple years or so, corporates have been paying much closer attention to the world of gaming, trying to figure out what they can learn from it.

Someone who’s experienced the growth of that interest first-hand is Jason Ried, managing director and co-founder of gaming and AR company Fuzzy Logic.

Growing up in Springs, a small city to the east of Johannesburg, South Africa, Ried has always been a geek at heart. While at school, he’d rush home to play Pro Evolution Soccer with his best friend, dreaming of the day he could make his own video games.

In 2002, Ried moved to the UK to pursue that dream. Starting off as a Quality Analyst at Eidos Interactive, he worked his way up to Associate Producer. He worked on big budget, AAA games such as Championship Manager, Just Cause 2, Tomb Raider, Hitman and Wacky Races, before moving to Disney Interactive Studios in 2008 where he was part of the team that produced the award-winning game Split/Second.

In 2011 he was given the opportunity to move back to South Africa to start up his own development studio. He decided to focus on the latest technology, augmented reality (AR), as well as apps and mobile games. And so Fuzzy Logic, headquartered in the coastal Western Cape city of George, was born.

As well as producing innovative work for clients, Fuzzy Logic has produced a number of mobile games, including Soccer Moves, which went to #1 on Apple charts in 52 countries and has been downloaded more than 3-million times.

Engage Me recently got to sit down with Ried to talk about Fuzzy Logic’s journey, how AR is invading the workplace, and why companies with no background in gaming are hiring game developers.

When Ried made the decision to launch Fuzzy Logic, he was at the top of his game. But, he says, “had reached a point where committing to another three-to-four-year title became difficult”.

At the same time, he told us, smartphones were becoming increasingly popular “and mobile games could be developed in 3-9 months”.

Following a chance dinner with his now business partner, they decided to see if they could do something together and, ultimately, Fuzzy Logic was born.

But where would the new business be located? At the time, Ried’s business partner had business interests in Johannesburg and George. The former is a cosmopolitan city with large-scale infrastructure, but after years in London, Ried had “very little interest” in moving back there. After visiting George, a town typically associated with seaside tourism, he was
impressed with what he found.

“Everybody assumes George is a little town,” he says, “but in reality it’s not like that”.

Ried is also keen to dispel any notion that Fuzzy Logic is made up of a handful of developers with a small-town mentality.

“The thing to clarify is that there are over 200 of us that are part of the larger business in George, split across four incredible buildings,” he says. “While it’s not all Fuzzy Logic, we are part of the same holding group and share a similar business culture”.

And as he points out, the fact that the company mainly has international clients means that it doesn’t really matter where it’s based.

That said, Ried believes there’s plenty to be said for being able to “work for a professional and quickly growing business, create world-class, cutting-edge projects and live within five minutes of the beach”.

Ried acknowledges however, that technology and process play a really important part in enabling this lifestyle.

“Having come from a console development background where single game teams are often easily over 100 people, we have really strong processes and supporting tools,” he told us. “Project management and communication are key and so software like Slack, Jira, Skype, Perforce and numerous others help us to ensure we’re always available, in touch and organised”.

The nature of Fuzzy Logic’s business, concentrated as it is on the mobile space, also makes being located somewhere like George much easier. “Mobile game development doesn’t require physical products and so we’re easily able to deliver digital content to clients, regardless of where they are in the world,” says Ried.

One emerging technology which looks set to be particularly fruitful for Fuzzy Logic is Augmented Reality (AR). One recent project saw it use AR to gamify the employee onboarding process at a major South African financial institution.

Ried thinks we’re likely to see much more of this kind of thing in the near future.

“From the very first time we experimented with AR (about five years ago) we understood the value of AR and how it will shape our world,” he told us. “The key thing to consider is that unlike virtual reality, augmented reality keeps people in their own world and simply enhances it”.

This, Ried says, means that there are a plethora of possible applications for AR in the workplace:

We all use or receive data/instructions/info every day and AR allows that data to be presented contextually and in the correct locations. If, for instance, construction workers could see the floor plans of a building laid out on the ground virtually, while they worked on top of it, they would be able to save a ton of time and avoid mistakes. This basic principle applies to nearly every company and job in the world.

The technology Ried is most excited about on this front is Microsoft’s HoloLens. “As soon as we got our developer kits, everyone in Fuzzy Logic felt that it was an incredible piece of hardware,” he told us. “Microsoft is also being very purposeful and deliberate in how this device is being marketed to businesses and not consumers, which we believe is the perfect approach and will result in a ton of great user cases”.

With Ried’s background being in pure gaming, it would be tempting to think that the transition to client-based work with Fuzzy Logic would’ve been a struggle, but the opposite is actually true.

With gaming, he says, “you ultimately have a client [the gamer] who has incredibly high expectations. In addition, working with a team of 100+, all with one single vision requires a lot of planning, thought and a need to never compromise on end quality”.

The Fuzzy Logic MD also believes that people with similar backgrounds have plenty to offer the corporate space:

We understand that users don’t always behave in ways that you want/need and that you need to create systems/flows which help them always feel in control. This sounds obvious, but it requires a lot of thought to ensure things are intuitive, easy to learn, but enjoyable to master. If you can get this right then systems can simply ‘feel right’ and this lowers the barriers to retention and engagement.

Companies in Europe, he says, have already woken up to this, thanks in part to the comparatively large size of its gaming industry.

“The games industry in the UK is massive with hundreds of thousands of people, if not millions, all working in games already,” Ried told Engage Me. “It’s been a massive industry and employer since the late ‘90s and naturally the people coming through that system have unique and compelling skill sets. Gamification is finally entering the mainstream of thought, but these people have already been applying their knowledge in other industries”.

According to Ried, it’ll take a little longer for smaller markets like South Africa to catch up. But, he says, progress is being made thanks to industry bodies such as the IESA. He also points out that “digital is helping speed things along as it no longer matters where you are in SA, just that you can always be around to help and add value”.

Looking forward, Ried says he’d “love the South African games industry to become like the small city of Brighton in the UK”.

This, he says, “has a natural knock-on effect of game developers feeling safe moving and living there as there are so many career opportunities and so, suddenly, the best teams are working there”.

With this kind of ecosystem in place, he reckons game developers could become serious exporters, bringing much-needed dollars into the economy.

“Right now, in SA there are definitely more experienced people working in games and the more this happens, the more we can gain experience as an SA industry,” Ried says.

With that kind of enthusiasm, who’s to say that the capital of SA gaming won’t be small coastal city best known for being a gateway to tourist adventures?