5 Incredible UAE office designs to delight and inspire you 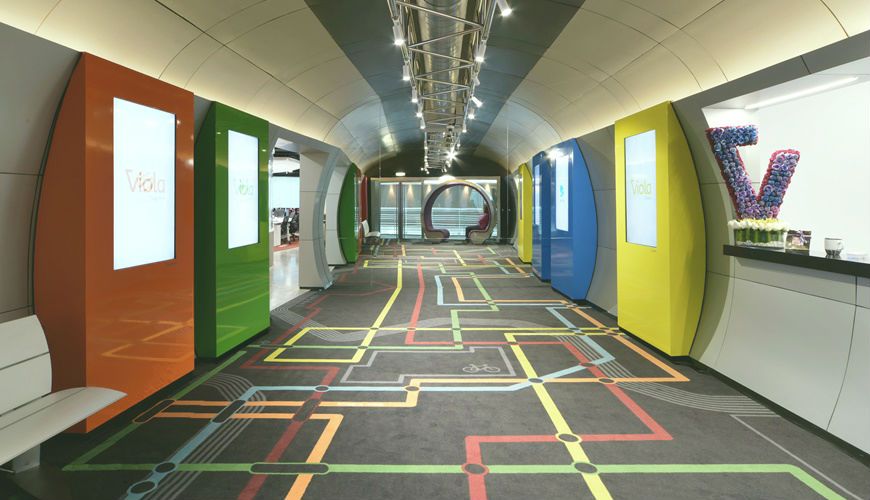 The UAE is home to some of the most daring architecture on the planet. Where else would you find a hotel that looks like it could sail away at a moment’s notice, or a skyscraper so tall that you can watch the sunset twice (once from the bottom and once from the top). That boldness in design isn’t just limited to shape and scale of the country’s buildings though.

An increasing number of corporate offices across the UAE are taking an approach to office design befitting of a country striving to beat the forefront of global innovation.

Here are a few of the best examples: Few companies project their essence as effectively as Virgin. Everything, from its typography to its marketing, screams youthful energy. All of its efforts on those things wouldn’t be much use if that essence wasn’t also reflected in the environments its staff work in.

A great example of this is the Virgin Mobile MENA headquarters. Located in Dubai’s design district, the office is designed to carry the idea “of a group of creatives sitting together to work on one common idea, like roommates at university”.

Blending the latest in urban cool with high levels of functionality, the space has a canteen area as its spine.

Breaking off from the canteen are private micro-meeting rooms, benches for lunch and chats, pool tables, and more informal seating areas.

As well as looking good, the space is designed to be the best possible working environment, with a lot of thought put into which departments should be seated next to each other. A marketing and communications agency located in Abu Dhabi, Viola Communications has been in its present offices since 2014 and boy are they cool.

Designed to inspire creativity, there are three separate entrances as well as waiting areas, related receptions, formal and informal meeting rooms, a higher management section, a pair of video editing studios, a recording studio, a server room, storage spaces, a pantry and a recreational space that has its own kitchen.

While the more formal areas of the office are incredibly well thought out, it’s in the recreational area that the design really starts to shine.

Inspired by Tetris, it’ll put a smile on the face of even the grumpiest curmudgeon. The entryway meanwhile is inspired by a metro-station, right down to the map-style carpet, which leads visitors to themed information boards detailing the company’s five departments. Ask someone to list inspiring workplaces and the chances of them mentioning a government department are pretty slim.

Almost by default, we expect these organisations to be dull, their office designs dominated by shades of beige.

The UAE’s Roads and Transport Authority certainly defies those expectations.

The space features plenty of curved edges and contemporary styling. Perhaps the stand out feature is the LED lighting.

The various adjustable lighting instillations are ridiculously cool. Perhaps more importantly though, they enhance the office layout into a brightly-lit attractive work space, improving the visitor experience as well as the working environment for staff. When it comes to office design, it’s important to remember that it’s not all about looking cool. Your workplace also needs to authentically reflect who you are as a business.

One company that does this really well is mother, baby, and child-focused ecommerce site Mumzworld.

Sure its Dubai offices, situated in Dubai’s Design District, contain plenty of aesthetically-pleasing features, but there’s also a wall dedicated entirely to its founding principles, toys and goodies stocked by the site scattered around the space, and the kind of paint scheme designed to produce a child-like sense fun. There are some who might think that we’ve included Biz Group on this list just because its offices have a slide.

To those people, we’d point to the blend of private and collaborative working areas, the ability for workers to imprint themselves on the office décor, and the ubiquitous messages of encouragement dotted across the office. Besides, how many other companies do you know of that offer weekly tours of their offices?

But seriously, there’s a slide.

What are some of the best office designs you’ve seen in the UAE? Let us know in the comments section below.