Hitting the right notes: Kieran Ballard-Tremeer on life as a pro musician in the UAE 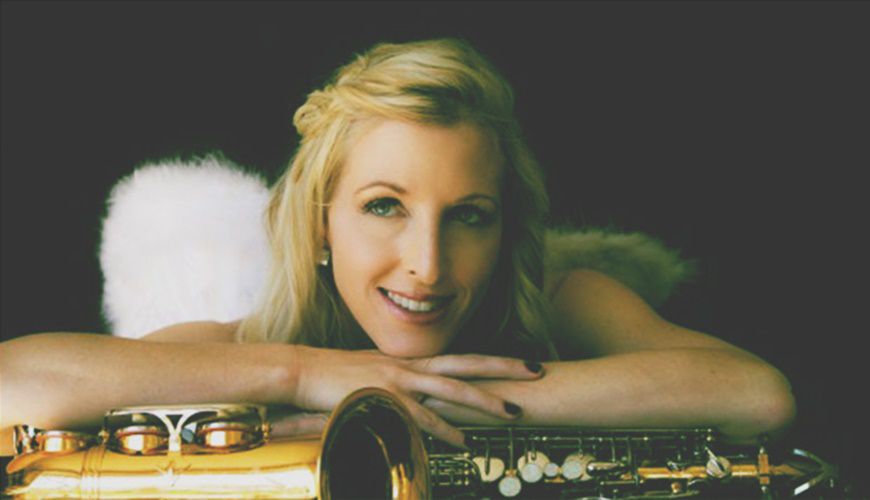 Most musicians have incredible stories to tell. Dubai-based saxophonist Kieran Ballard-Tremeer is no exception. If you’re expecting unbridled hedonism though, you’ve come to the wrong place. A consummate professional, Ballard-Tremeer will instead tell you about the beautiful locations she’s played in, some of the weird outfits she’s had to wear, and – just maybe – her record-setting swim.

We recently got the chance to chat to Ballard-Tremeer about her journey as a musician, the difference between playing orchestral and corporate gigs, as well as her tips for young musicians looking to turn their passion into a career.

Born in South Africa, Ballard-Tremeer spent part of her childhood in the UK. It was there that she heard a friend playing the clarinet and, in her own words, “that was it, I was hooked”. She carried on playing on all through school and through a move back to South Africa.

Once she was done with school, Ballard-Tremeer made “the brave decision to become a musician and studied music after school” (with, she notes, the full support of her parents).

She was also smart enough to take up saxophone at university, given that there’s a much bigger demand for jazz saxophone than clarinet. “It doesn’t quite have the same image,” Ballard-Tremeer told us.

After graduating, she spent time in a number of South African professional orchestras, as well as taking on freelance work.

In 2005, she made the defining decision to move to Dubai, working for Emirates Airlines – something which allowed her to travel the world and hear performances from musicians around the world. She describes this experience as “really inspiring, amazing”.

In the last few years, Ballard-Tremeer has settled back into her music. That does not, however, mean that the amazing experiences have stopped, far from it.

While Ballard-Tremeer looks back on her orchestral days with fondness, she says she now prefers the freelance and corporate work she does.

In part, that’s down to the variety of venues and settings it’s enabled her to play in.

“I’ve played everywhere from the Kempinski on the Palm, to on the balcony at of the Burj Khalifa and it’s really different for every event, which keeps it exciting as well,” she told us.

Those amazing locations haven’t been limited to Dubai either. During her time in South Africa, Ballard-Tremeer played at a wedding deep in the bush “under the stars, under a 2000 year-old Leadwood tree with an electric fence around it to keep the cheetahs out”.

That said, she has a special fondness for the venues in the UAE, especially the ones that integrate a bit of local flavour into their architecture.

“Even though I go in and repeatedly do events, there’s something magical about the twilight time, where you dress up, you look nice, walk into these incredibly beautiful places and spend the evening there,” the saxophonist told us.

Getting to experience a variety of beautiful venues isn’t the only reason Ballard-Tremeer prefers the life of a freelance musician though. While she still has an abiding love for classical music, she really enjoys the musical freedom her current line of work gives her.

“I actually really enjoy playing current hits and jazz standards,” she told us, explaining that those genres are “very free and you really play it as you feel, as opposed to reading notes in a book”.

Dubai does it best

That does not, however, mean that Ballard-Tremeer can play whatever she wants. She’s well aware of that playing for some clients requires an acute degree of cultural sensitivity.

That said, she thinks there are few places for someone like her to base themselves out of than Dubai.

“It’s a world standard place to perform because all of the professionals who you rely on to help make your performance go well, are really top notch here: the sound engineers, the event planners and so on,” she says of the UAE’s largest city.

That’s a stark contrast to some of her experiences in South Africa, which included a power outage during a gig and a waiter tripping over and ripping out a power cable in the middle of one of her performances.

That’s not to say she takes any of that professionalism for granted.

“I think as a musician, you always have to be prepared for any unforeseen circumstances,” Ballard-Tremeer told us.

Sometimes though, the challenges faced by a musician have nothing to do with the music itself.

Ballard-Tremeer, for instance, told us about the time she was asked to wear giant angel wings and knee-high boots for a gig. “It was fine,” she said. “It’s not really my comfort zone, but as long it’s reasonable. After all, you’re there to help market their company or create an ambience for an event”.

Another interesting gig during Fashion Week Dubai saw her “play saxophone while wearing a lovely outfit, walking down the catwalk, trying not to fall down in high heels”.

In both those cases, however, Ballard-Tremeer wanted to do the gig and made sure that her clients got full value out of her.

Freedom from playing for exposure

Ballard-Tremeer is also fortunate to be at a point in her career where she can turn down gigs that she wouldn’t feel comfortable playing.

Another thing she can do far more easily than younger musicians looking to establish themselves is turn down gigs where the only thing promised is “exposure”.

When considering whether to take on a gig for the exposure, Ballard-Tremeer suggests looking at who’s organising it. If it’s for a good cause, or organised by a charity, or if the gig presents a good opportunity for a little press coverage and networking, then it might be worth it.

If, however, it’s for a corporate and “you plan to make a living out of being a musician, you have to know when to say no as well”.

While Ballard-Tremeer has few career regrets, she does say that she wishes she’d learned to sing or play guitar.

“It’s such an easy thing to do,” she says in reference to singing. “You don’t need equipment. As long you’re not sick and don’t have a cold, you can really perform anywhere”.

By contrast, a saxophonist needs to “know the humidity at the location because it affects the reeds which make the sound”.

A guitar, she points out, is similarly adaptable and is also a hit in most scenarios. “I don’t know anyone yet who’s taken a saxophone on a camping trip to sing songs around the fire,” she told us.

Hardly surprising then that her top piece of advice for aspiring musicians is to be versatile both within and outside of their specialisations:

“Even if you really love modern classical music, you have to remember that maybe the market for earning money might come through some other avenues, which might not be your initial first love of music”.