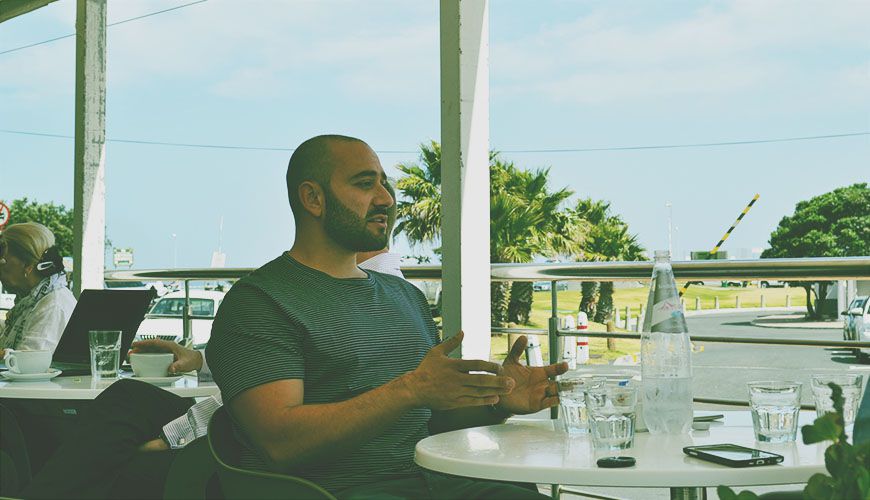 Everything about Mark Fawzy, from his taut muscles to his overall demeanour and energy, screams CrossFit. It’s difficult to picture him ever doing anything as mundane as finance or branding. Those experiences would, however, prove invaluable when a wet logbook inspired Fawzy to launch BoxChamp – an app designed to bring together fitness centres and their members.

We recently got the chance to sit down with Fawzy and talk about the BoxChamp journey, using technology to allow businesses to focus on what they’re good at, and going international.

Looking at Fawzy’s early career, there was little to indicate that he would come to be an entrepreneur in the fitness tech space.

After completing a Bachelor of Commerce (B. Com), Fawzy studied marketing at renowned Cape Town advertising school, Red & Yellow. After a year-and-a-half in media, he joined the founding team at BOS Ice Tea, a soft drink company based in Cape Town which has expanded into international markets and counts former Manchester United manager Sir Alex Fergusson among its investors. According to Fawzy, this experience was “awesome”, because “it was a new brand and sparked a whole load of passion in building something from the ground up”.

From there, he returned to his roots, going back into finance. Around the same time, he got into CrossFit, the branded fitness regimen created in the late 1990s and which has exploded in popularity over the past decade.

A dedicated follower of the discipline, Fawzy always carried a logbook with him to workouts, marking his progress. After his book got wet one day, he tried to find an app that would allow him to properly log his scores.

Coming away frustrated, he decided to go down the path taken by so many entrepreneurs before him and build the solution he always wanted.

Reasoning that if he wanted an app that allowed him to manage and track his progress, others would too, Fawzy launched BoxChamp. Applying his financial nous, however, he realised that it would take more than that to turn the app into a viable business.

From a gym member point of view, the app also includes the ability to book classes, a virtual whiteboard with a live feed of athlete performances as they’re logged, and a nutrition log which lets you keep track of what you eat and drink throughout the day.

The gyms themselves meanwhile can manage and track their athletes, get attendance reports, and even accept payments through the platform.

Including those features was not, however, just the result of business savvy. Fawzy and his team put “a whole lot of research and development” into the app. “I spoke to quite a lot of people in the industry and made some connections,” Fawzy told us, “and through networking, I met a lot of the most influential people in CrossFit in South Africa and I got their backing and their buy-in for the concept”.

“What started out as just a performance tracking platform, has now morphed into a full on one stop shop, all-in-one business management solution for fitness facilities,” he said.

The business of business

The features aimed at the gyms were a particular masterstroke. They were a recognition that most gym owners (like all business people) would rather not have to do all the admin necessary to do the thing they love.

“Gym owners are inherently, in general, not really business people,” Fawzy told us. “They’re passionate about coaching, passionate about fitness, but when it comes to the business side, they don’t really have time for the admin. There’s a lot of admin tasks that we take off their hands and simplify so that they can do what they’re actually passionate about”.

That can actually be to the benefit of the business too. “The whole idea is actually building better fitness businesses, which ends up resulting in better coaching, more fit people, and more active people,” Fawzy said.

While Fawzy told us that the BoxChamp team will continue building features onto the app, he said that the focus right now is on increasing its international presence.

That’s more complicated than it seems. For one, you have to integrate payment gateways to facilitate payments all over the world for things like gym memberships and merchandise.

BoxChamp is also, however, looking for big brand partnerships. It’s already inked a deal with Reebok – sponsor of the CrossFit Games – which it’s trying to solidify. Part of that, Fawzy told us, includes “gamifying the platform to engage people more with their brand”.

Coming from South Africa, which has a comparatively weak currency, Fawzy believes BoxChamp has a clear advantage over the competition.

“Overseas, we’ve got a major cost advantage, that’s one of the things that puts us ahead of our competition,” Fawzy said. “With the South African Rand and with the cost of resources in South Africa, we are able to provide the product at a competitive price point internationally”.

It’s not just about favourable exchange rates though:

“Because we’re also a bit smaller than established international platforms, we’re more agile,” he told us. “So we can see what everyone’s doing and we can adapt at the moment to see what gaps they aren’t filling, what the deal breakers are, and what’s going to make a difference internationally”.
From niche to mainstream

While Fawzy acknowledges that focusing on a niche was initially very important, he does believe that there’s room for BoxChamp in other verticals.

“I think it was great to go quite deep into one category and do it well and I think that we’ll still remain with a focus on CrossFit,” he told us, “because we also form a bond with the CrossFit gym owner to show them that we actually provide something that’s specific to their needs”.

In saying that, he added, “we also identify that there are other verticals that need our product and would be more than happy to use it”.

While Fawzy’s business acumen is clear, what shines through most visibly when interviewing him is his passion for his chosen path. He genuinely believes that BoxChamp can help address some of the misconceptions around CrossFit, by enabling gym owners to do their jobs better, in turn creating better athletes.

His ultimate hope for those athletes? That they’ll focus more on improving themselves than on the competition.

That’s something wholly in line with his understanding of the CrossFit movement.

“CrossFit made fitness measurable in so many ways,” he told us. “So every time you log a score, the following time you do that exercise, you remember exactly what you did and you beat that score and that’s how we see progress”.

“It’s a lot of competitiveness amongst peer groups, but it’s also just focusing on yourself, on progress in your own performance”.