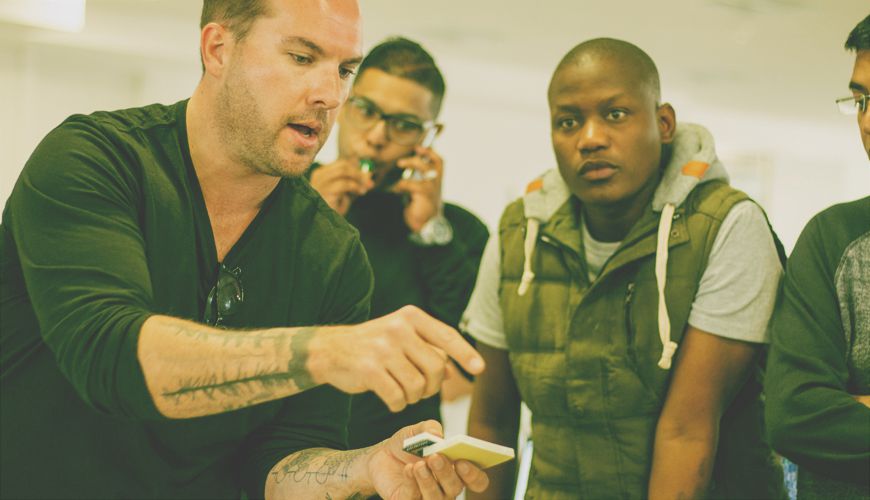 For far too many years, employee education and training has meant going to a course, listening to someone rattle on for a few hours, maybe taking a test, and going home with a certificate. That’s great if you want to get out of the office for the day, not so great if you’re looking to apply new, practical skills to the workplace. One company looking to change all that is a South Africa-based design consultancy called Inquisition.

We recently got the chance to sit down with company founder Vincent Hofmann to find out how it’s bringing its specific brand of design-oriented learning to South Africa’s corporates. Founded in 2011, Inquisition helps companies build skills and increase cooperation among teams by bringing the fun back into learning.

While Hofmann admits that getting corporates onboard was pretty daunting in the beginning, he’s now so confident in Inquisition’s offering that he has his sights set on changing the very nature of the South African educational system. How does Inquisition plan to get there? Well, it starts with making you forget that you’re learning.

The art of unlearning

Inquisition’s approach to education comes from the understanding that, in Hofmann’s words, “most corporate learning is rubbish”. If you look at what most corporate learning and training companies offer, he told us, they end up “emulating the problems that are inherent in universities”, including taking a very linear sequence to learning, and a focus on individual rather than team learning.

Thinking that there had to be a better way, Inquisition started looking at ways of helping people “unlearn” the kind of thinking these educational models engender.

Inspired by the Finnish education model, it came to the conclusion that learning happens best when you’re on a mission.

The first step on that front was to reject the idea that every corporate learning event should come with some sort of certificate or incentive. Instead, Inquisition tries to make learning the job, and the job, learning.

In this regard, it’s inspired by the Agile and Lean models, where people “obsessively learn and take an experimental approach to learning with the teams”.

“They’re trying stuff on the team,” Hofmann told us. “No one’s telling them that as soon as you try this stuff out and if you successfully try it and your business unit grows more efficient, you’ll get a certificate”.

That, he says, is important for Inquisition because “the learning feels so good, it feels fun”.

“One of the design challenges we set ourselves was that all learning should feel fun,” he told us. “Not only should you forget that you’re learning, but we should also make you curious and excited during the process”.

Another inspiration for Inquisition is the Maker culture, which revels in the creation of new devices as well as tinkering with existing ones.

When Inquisition blends these models, it creates scenarios where people feel free to experiment and where mental blocks can be easily overcome.

One of the best examples of this saw Inquisition organising an event for a private investment bank’s digital arm.

The aim of the event was to increase digital confidence within the team. Inquisition therefore designed a day of learning that would see teams racing a custom-designed electronic race car.

The newly-formed teams would then have to work together to assemble, test and refine, then automate their car movements around a track. The mission being to successfully complete the fastest automated lap around the track. The assembly, testing and automation components of the build were used as a medium to blend in learning about how to work more effectively as a team and as a way to naturally practice new ways of working.

It worked too. According to Hofmann, some of the teams ended up putting the shells of the cars on backwards because they realised that they handled better that way.

“It was such a weird outcome,” he said. “But then the learning is explicit: don’t take anything for granted. There are no rules, just try everything”.

That’s why designing learning to be part of a mission is so important to Inquisition’s work. When people need to solve a problem, learning moves from something that feels highly conscious and pressurised to sub-conscious and intuitive.

“The amazing thing to see is how quickly, when someone’s not told they’re learning, they don’t mind overcoming that problem,” Hofmann told us.

It also means that everything that happens during a learning session can be turned into a learning moment.

“So, for instance,” Hofmann says, “if in our robotics courses, someone sets something on fire (which has happened a number of times), or breaks a circuit, we can immediately drop in information around the idea of uncertainty and how to cope with it. It was an experiment, it burst into flames and that’s okay”.

That, he believes is a much more efficient approach than paying insane amounts of money for a management consultant to tell you that failure’s okay. “In two seconds, when you see something’s on fire and we say, ‘that’s okay’, that’s exactly what we’re trying to say,” he told us. According to Hofmann, taking this approach comes naturally to Inquisition. As a design consultancy, it’s used to being given a challenge and doing everything necessary to achieve that challenge:

“If there’s a mission in place,” he adds, “people tend to want to learn to solve that mission”.

In the future, Hofmann hopes to take Inquisition’s learning offering beyond the corporate space and into the South African schooling space.

Within the next five years, he told us, Inquisition wants to open a network of schools using its approach.

In particular, he wants to help solve the country’s massive problems with Maths and Science.

“It’s not fun to learn math and science in a class when there’s nothing exciting to do,” he says. “I mean, you’re not going to see a race car at the end. I’m sort of saying, let all of the learning dissolve into the process and let the process become the learning, which is a very unusual way to do learning”.

“And we’re trying desperately to find ways of taking our work and spreading it to a broader audience…to the people who need it the most, which is young kids”.

That said, Hofmann acknowledges that Inquisition wouldn’t be where it is without those paying corporate clients.

“We are very lucky in that our clients trust us to do this stuff and very lucky that we’ve earned that trust, that they’re willing to also experiment,” he says. “It takes a very agile organisation to say ‘yes, this learning is now also an experiment, there isn’t actually a set, definitive outcome, as long as it hits the master challenge, we’re okay.’”

“Over the next five to 10 years, as artificial intelligence grows ever smarter and more human, we as human beings need to make sure that we’re doing as many of the human tasks at work as we possibly can and outsourcing as much of the function of the machine to machines,” he told us.

“I think that, for us, is the sort of parallel challenge. Which is why we’ve arrived at the purpose of our team, which is to make work more human”.