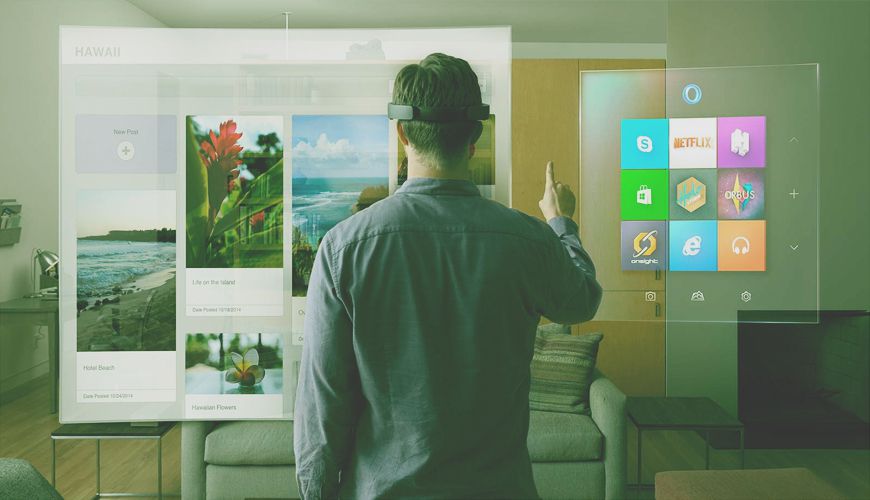 While it might not always feel like it (especially when you’ve been stuck with the same half-broken laptop for years), technology has completely changed the way we work.

Fax machines have come and gone, printing is now something you do in three dimensions, and a cloud is no longer just a fluffy-looking thing in the sky.

But where to next? What technologies will transform the office next? While making these kinds of predictions is never easy, a look at emerging trends can give you a fairly good idea.

Here are a few of the ones we’ve got our money on:

The Internet of Things is, quite simply, the use of the internet to connect everyday objects embedded with computer sensors.
It’s one of the most important developments in human history and it will have a massive impact on every environment we spend time in, including the office.

Connecting sensors with desks, for instance, could allow for employees to easily and quickly choose where they want to work for the day, rather than confining them to an assigned desk.

At the same time, having an array of sensor-connected environments, could allow companies to figure out which employees work best in which environments, and make changes accordingly.

Sensors embedded around the office, meanwhile, can help companies figure out what spaces are being used least and redesign them, or even scale back to save on rent.

Depending on which business-cum-science visionary you talk to, artificial intelligence is either the best thing to ever happen to humanity or the thing most likely to doom humanity for good.

While we’re a fair way off knowing which one is more likely, there’s no getting around the fact that AI will completely transform the office.

This is especially true in the enterprise space, where things we now take for-granted (such as call centres), could be rendered redundant.

On a more positive note, AI could also dramatically improve processes and productivity in the workplace, reducing everyone’s stress levels. Programmed properly, a piece of AI software is much more likely to know which pieces of work should be prioritised and in what order they should be done than a human being.

Autonomous vehicles are no longer just a part of our imagined future. They’re here and operating on an increasing number of roads. And, if things go the way we expect them too, they’ll dramatically change our workspaces.

First off, by removing driving responsibility from humans, everyone in a car can use the time they’d usually spend in traffic working. According to a study by Morgan Stanley, freeing up people from the constraints of traffic could add US$507-billion a year to the US economy alone.

Add in factors like fuel efficiency and savings from accident avoidance, and the total potential annual savings to the US economy rises to US$1.3-trillion.

When it comes to the physical workspace, however, perhaps the most dramatic change will come as autonomous cars make parking spaces redundant.

The spaces once reserved for parking could be transformed into working and living spaces, slowing down the spread of cities.

While some people find themselves competing with robots for jobs, others are becoming a little more like robots to keep doing their jobs.

When we think of this kind of human enhancement, we tend to think of robotic exoskeletons that make it easier to pick up and move objects.

Devices such as Microsoft’s HoloLens, for instance, allow people to call up information at will, while allowing them to keep working on the task at hand. Similarly, architects and designers can create and collaboratively tweak models of their work in virtual spaces.

Those are all child’s play in comparison to what comes next. We may well reach the stage where, in order to keep up with technological advances, workers are forced to look at things like neural implants and Brain Computer Interfaces. Elon Musk is among those who think this scenario is likely and has launched a company with the aim of creating devices that can be implanted in the human brain. The idea is that these devices will help humans merge with software and keep pace with advancements in artificial intelligence.

Necessary as such technology might be, you’d hate to think that your next promotion will depend on which brain implant you can afford.

Smartphone companies have been promising us that their products will allow us to ditch our desktop for years now. Usually it involves a docking station that connects to a PC monitor and keyboard. And usually it’s a massive flop.

With the 2017 launch of the Samsung DeX, however, it finally looks like we’re getting somewhere.
The US$149.99 docking station a basic dock that you plug the phone into that provides connections for a monitor, power, Ethernet, and USB devices.

According to The Verge, however, the DeX’s real party trick comes in the shape of the software.

What Samsung’s done is take a few Android productivity apps and optimised them for the mobile-desktop experience.

While not entirely perfect, the DeX is probably the closest we’ve come to being able to ditch desktop and laptop computers.

Take the DeX concept and apply it to a dock that works with any kind of smartphone and suddenly the workplace becomes much more flexible. Add in other near future technologies like easily mountable roll-up screens and keyboards and it’s not inconceivable to think that people could carry a full desktop experience in their pockets.

Which technologies do you expect to change the future of the office? Let us know in the comments section below.