4 Awesome boardroom alternatives from around the world 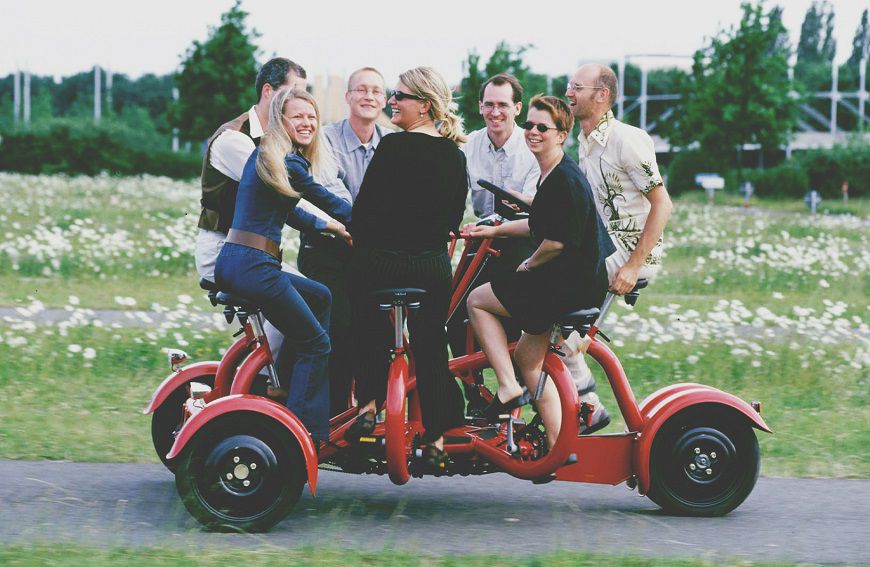 If you ever feel like sucking the joy out of someone’s day, send them a calendar request for a meeting they weren’t expecting to be involved in. Most people think meetings are a waste of time and there’s an increasing body of evidence that they’re right. Now, there are plenty of ways to help staff spend less time in meetings but there are times when you absolutely have to gather your team together.

Thankfully though, that doesn’t mean you have to stick to the same practises that help make meetings so awful.

Yup, there are alternatives to plonking everyone down around a boardroom table and designating someone to put ideas down on the whiteboard.

We’ve outlined some of the best ones below.

Originally conceived as an artwork, the ConferenceBike is a seven-seater bicycle (one person steers while the other six pedal). Since launching, it’s found a number of uses. According to the ConferenceBike website, “It is a tour bike in Berlin, Baltimore and San Francisco; a tool for corporate team-building in Copenhagen and San Diego, a way for blind people to bike in Dublin and Florida”.

But perhaps its most high-profile use has been on the Google campus. There, they’re not only used to move people between buildings on the campus, but also as a kind of rolling meeting venue. They look like a total hoot, but “fun” isn’t the only advantage they have over traditional meeting rooms.

First off, the circular arrangement means that no one can take a priority seat (unless you count the person steering). Secondly, by ensuring that everyone gets a little exercise, it also ensures that their brains are working a little better.

The ConferenceBike is great, but it does require a fair amount of time to be effective. That means it probably won’t go down too well with the ultra-efficient kind of employee who thinks that all meetings are a waste of time.
Luckily there’s a solution for them too: the planking meeting. An attempt to make the traditional stand-up meeting even faster, it’s another way of incorporating exercise into the daily work routine. Depending on the company, the rules go something like this:

If you implement this kind of meeting, just make sure that the most opinionated people on the team aren’t gym bunnies.

Anyone who’s read up on Steve Jobs, will know that he was a big fan of the walking meeting. It was how he made some of his most important decisions at both Apple and Pixar. In doing so, he was drawing on a long line of thinkers and also setting the path for future Silicon Valley leaders. Mark Zuckerberg and Jack Dorsey are, for instance, both fans of the walking meeting.

Aside from getting you out in the fresh air, walking means that you can concentrate on the topic of the meeting without the distractions of office life around you (if you really want to make sure everyone’s paying attention, tell them to leave their phones behind).

Those aren’t the only benefits though. Check out this TED Talk for some other ways walking meetings are good for you:

Okay, this works better for one-on-one meetings than big group efforts (you’re not going to sort out your team’s weekly tasks during an interval training sessions), but there’s something to be said for making a workout part of your meeting.

Quite apart from the endorphins and extra oxygen to the brain, there’s the psychological impact of showing someone that you trust them enough to let them see you at your sweatiest.

You wouldn’t exactly be blazing a new path either. Spinning and other gym class meetings have been part of the New York corporate scene for a few years now.

While there’s undoubtedly still a time and place for meetings in the boardroom, the above examples show that they are far from the only way of going about things. They also show that with a little imagination, you can have meetings that don’t leave you, your team, or your clients banging your head against a brick wall in despair.